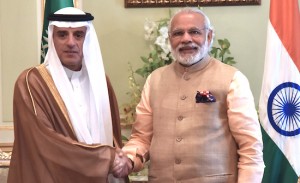 India’s Prime Minister Narendra Modi’s recent visit to Saudi Arabia may disturb Pakistan as economic and strategic opportunities are bringing New Delhi closer to the gulf nation. Amid changing strategic realities in the Middle East, Mr Modi visited Saudi Arabia to bolster bilateral relationship, just eight months after he visited to the United Arab Emirates (UAE). “After years of considering Saudi Arabia as a major ally and economic benefactor, Pakistan may be on the verge of losing its erstwhile patron to archrival India. Modi arrived in Riyadh last week for an official visit full of diplomatic significance,” said Aparna Pande, director, India Initiative of the Hudson Institute.  According to experts India is increasingly pursuing diplomatic efforts in this region with a view to isolate Pakistan and its policy of using terrorism as state policy.

India is a major trade partner in the region. The Saudi Arabia is trying to leverage Indian expertise in IT and services to reform and diversify its oil-based economy. Strengthening ties between these two countries may loosen Saudi-Pakistan relationship. Ms Pande said Modi’s visit and the warm reception he received were the latest reminders to the Pakistani leaders that international relations are based on national interest and not on vague religion-based ideology. “Economic and strategic issues are bringing India and Saudi Arabia closer, just as they are working to the advantage of India with other countries,” Ms Pande added. The Saudi-Pakistani relationship has hit a troubled patch in recent times, which was supposed to be very strong in the past.

When Mr Modi visited to the UAE in 2015, Pakistan was on the target. Making a crucial breakthrough, both the countries were able to redefine contours of bilateral relationship. In a diplomatic blow to Pakistan, both countries denounced terrorism in “all forms and manifestations, wherever committed and by whomever, calling on all states to reject and abandon the use of terrorism against other countries, dismantle terrorism infrastructures where they exist, and bring perpetrators of terrorism to justice.” UAE endorsing India’s concern on terrorism is certainly a diplomatic triumph for India as Abu Dhabi is one the closest ally of Pakistan.

Bilateral trade between India and Saudi Arabia was at $39.4 billion in 2014-15 compared to $6.1 billion bilateral trade between Islamabad and Riyadh. Saudi is also India’s largest oil supplier, which fulfills on fifth of its energy requirement. Pakistan could stick to its guns and see these developments as a threat. “Or it could change its own approach to India and seek rapprochement to take advantage of economic and strategic opportunities that are making India a desirable partner for Pakistan’s erstwhile friends,” she said.

Zahid Hussain, a former newspaper editor in Pakistan had said in a report that Pakistan knows that relations with Saudi have come to a low. That doesn’t mean that India can fill that gap. “But certainly this is part of Modi’s diplomatic offensive in the region.”